Traditionally Helium is used as a carrier gas for a SimDist analysis. In 2018 ASTM revised the D2887 method to allow the use of Hydrogen and Nitrogen as an alternative carrier gas. When using Hydrogen or Nitrogen a bias correction for the obtained results is required. Da Vinci Laboratory Solutions evaluated the performance of the DVLS Mid-Range SimDist Analyzer using the alternative carrier gases Hydrogen & Nitrogen and published the results in a new application note.

The analysis is performed according to procedure B of the ASTM D2887 method using three different carrier gases. For each carrier gas the system is validated according to the method using one validation sample and two Gas Oil samples, of which one Gas Oil sample contains FAMEs. The analysis results of all three carrier gases pass the criteria for validation, resolution and skewness specifications as described in ASTM D2887 Procedure B.

To check if the results determined with the alternative gases are significantly comparable to those obtained with Helium a paired t-test is performed based on eight replicate measurements for each carrier gas. This test is carried out before and after a bias correction. Bias correction is performed on Hydrogen and Nitrogen according to ASTM D2887-19aε1 Table A.1.4 (H2) and Table A.1.8 (N2). The DVLS PetroReporter software is used to apply the bias correction for the different carriers and correlate the results to ASTM D86. In this experiment all the calculated t-values, with bias correction, are lower than the critical value.

Conclusion of the evaluation 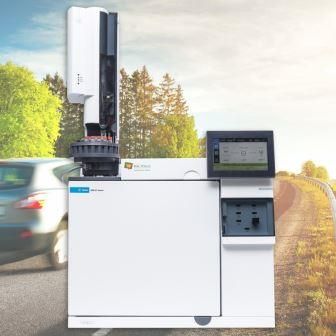